If you've uploaded files to the FTP, then post in here so the staff will know what to do with them.
Post Reply
6 posts • Page 1 of 1

Before I get into this, I'd appreciate if anyone who tries this out informs me if it works online. My current situation doesn't allow me to host games though I can join the games of others. 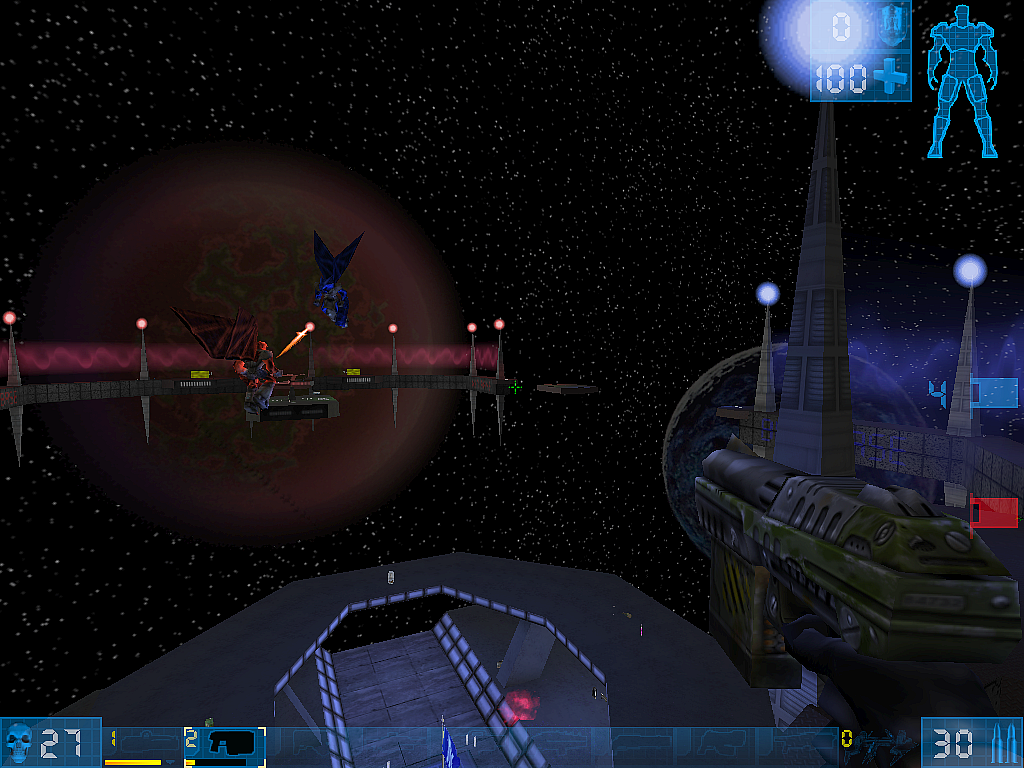 Years ago this was 1 of the first maps I played online that had flying vehicles on it, I only found out what it was called again a few months back. Hopefully what I've added to it won't change how well it plays online.

Tried for weeks to find the original mapper, but apparently Seismic moved on from ut99 to ut2004 and then no idea what happened to him.

Originally this map only had ZenCoder/Gandhi's Quantum Fighters on it, but now it's got 4 flying vehicles... 5 if you count the wings. 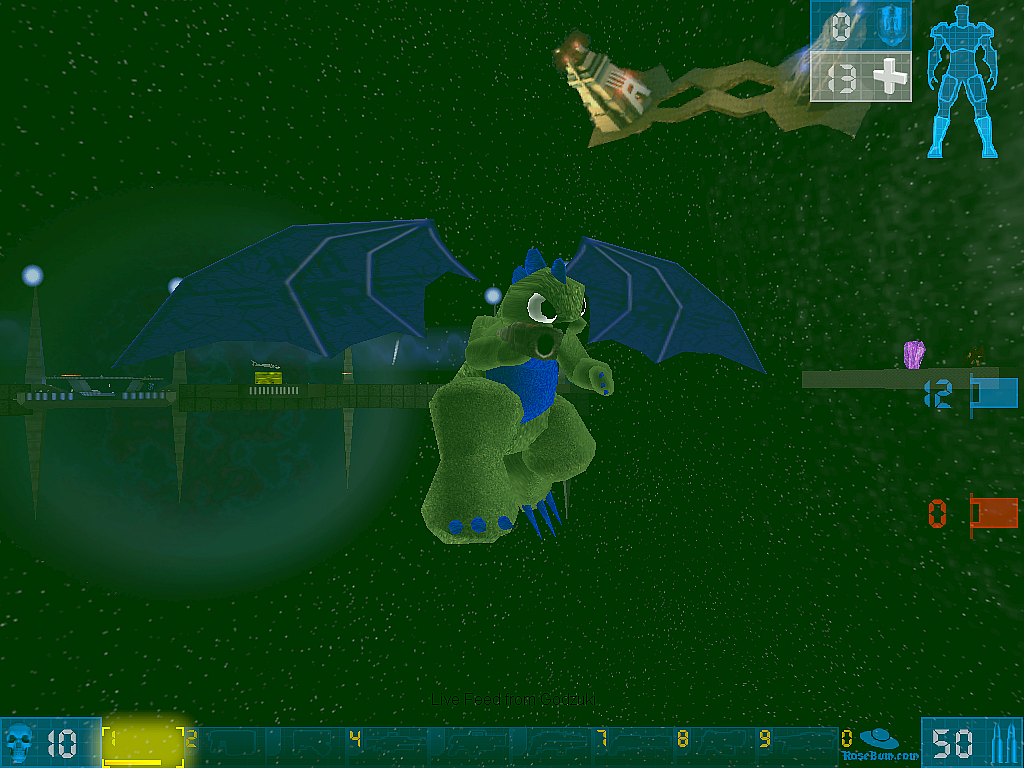 Bat-Wings: Basically once you've picked up an egg, they spring out from your back whenever you jump or fall from something. Eggs are located behind each flag base in open space, mostly so bots wouldn't get them though they sometimes still do. You leap out, snag it, and then start hitting whatever is your crouch key to flap. Flying speed is about the same as a Warlord unless boosted either from ejecting from a flying vehicle or you can get a speed boost from any of the jump pads around the map.

Wings can make boosted jumps last longer as they allow for gliding.

If you've got wings they tend to be visible when you're flying in any other vehicle. 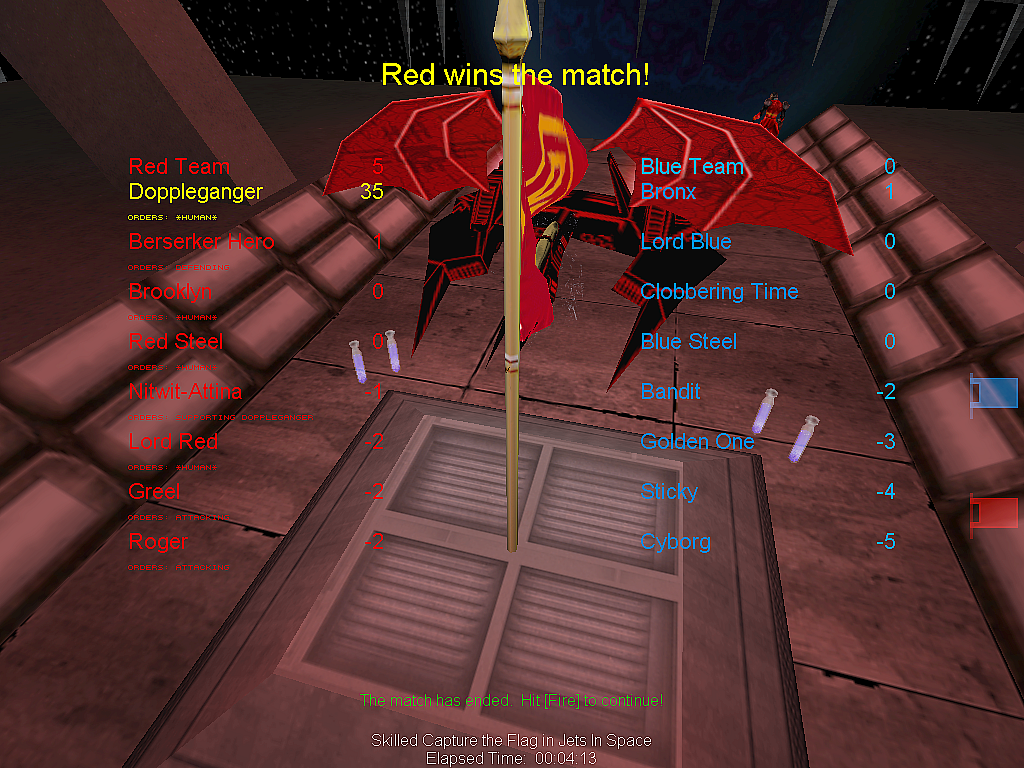 Rocket-X: Going by the tags on it, this is an official version for the =VulpineMission= forum. I went through a lot of jets to try and find one that didn't have that green screen issue, but I'll get back to that. This particular Rocket-X has unlimited ammo and if you decide not to fly but just shoot it can work like a heat seeking redeemer so long as you get a lock on your target. 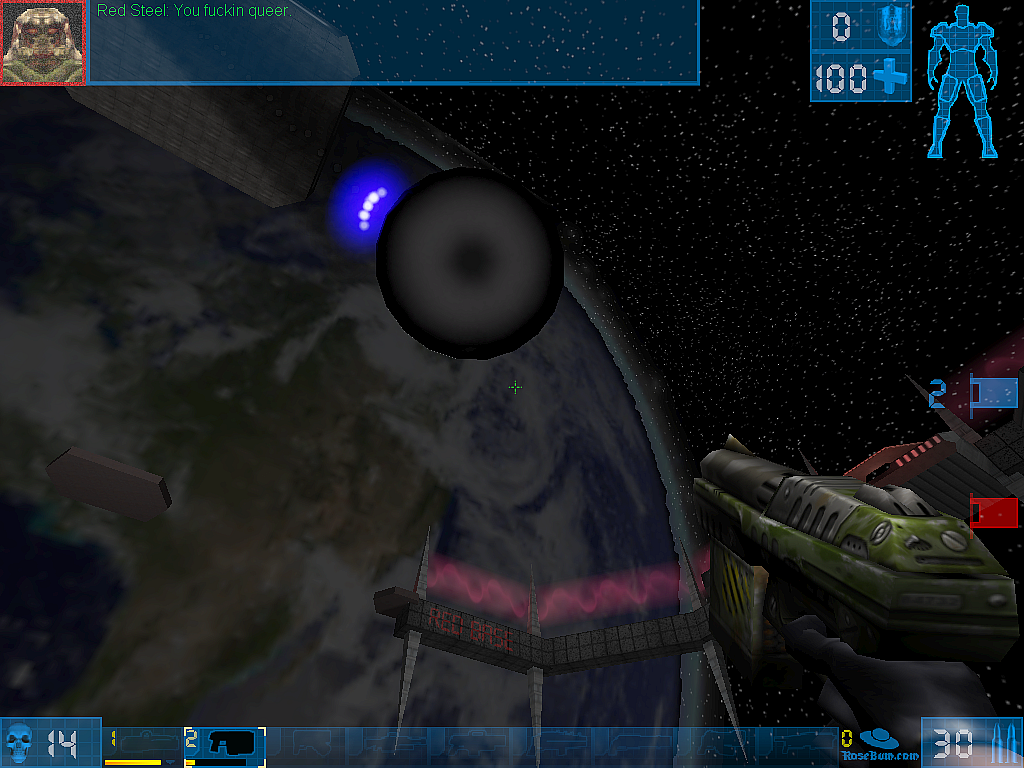 RoseBum's Flying Saucer: There's only 2 versions of this that I know of and this is the 2nd as it had less green screen issues than the original. Unlike the original it's not effective to just shoot it at passing targets, the projectile kinda sucks so far as (didn't come with a ReadMe) I can tell. As a flying saucer it has unlimited ammo, and I think it can kinda skim surfaces a little less explodey than the Rocket-X. Also, it can come to a complete stop, you can exit it and use the saucer like a staging platform to fire other weapons from.

Overall the saucer doesn't look as good design-wise as the original version, but like Han Solo said it's got it where it counts. 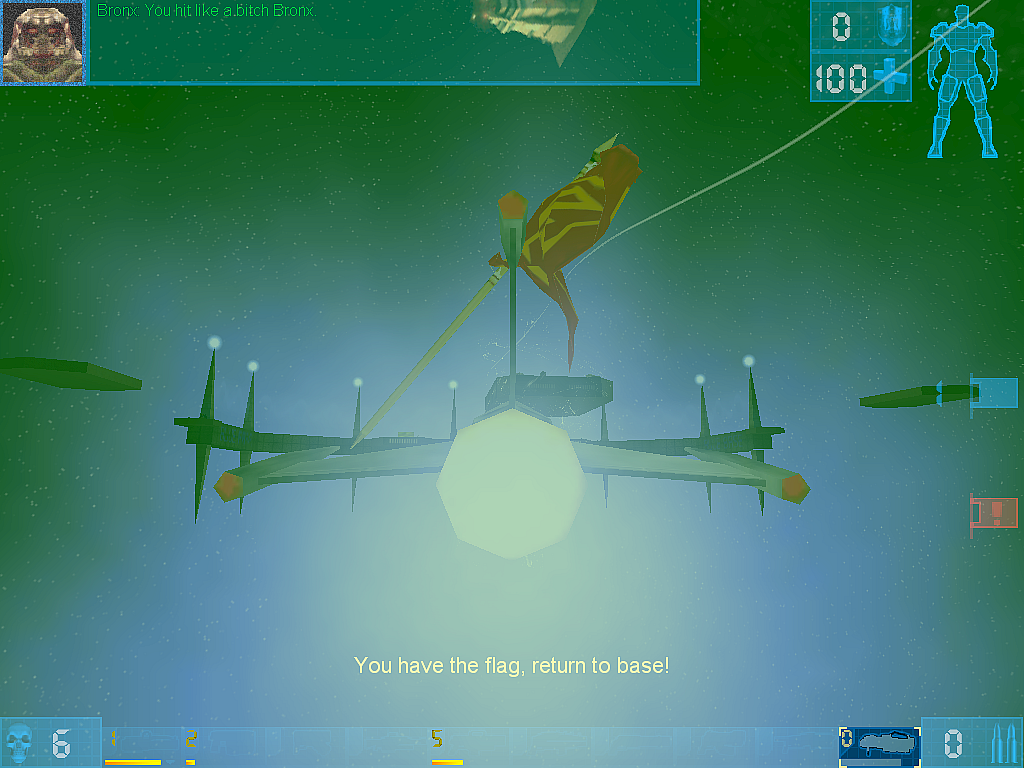 SLV2 - StrangeLove: Having no projectiles, this vehicle is fast enough but it's mostly a ride & die situation. Heavy with the green screen issues but it has its moments. Been riding Rocket-X and the Flying Saucer enough times to get surprised by a bot on an SLV actively chasing me around the map... and of course the thing is basically a nuclear missile so ramming the target is kinda the idea.

Bots can fly the SLV and the Bat-Wings really well, not so much the Rocket-X or Flying Saucer... though they do occasionally launch those things. The one thing bots can't manage at all is the Apache. 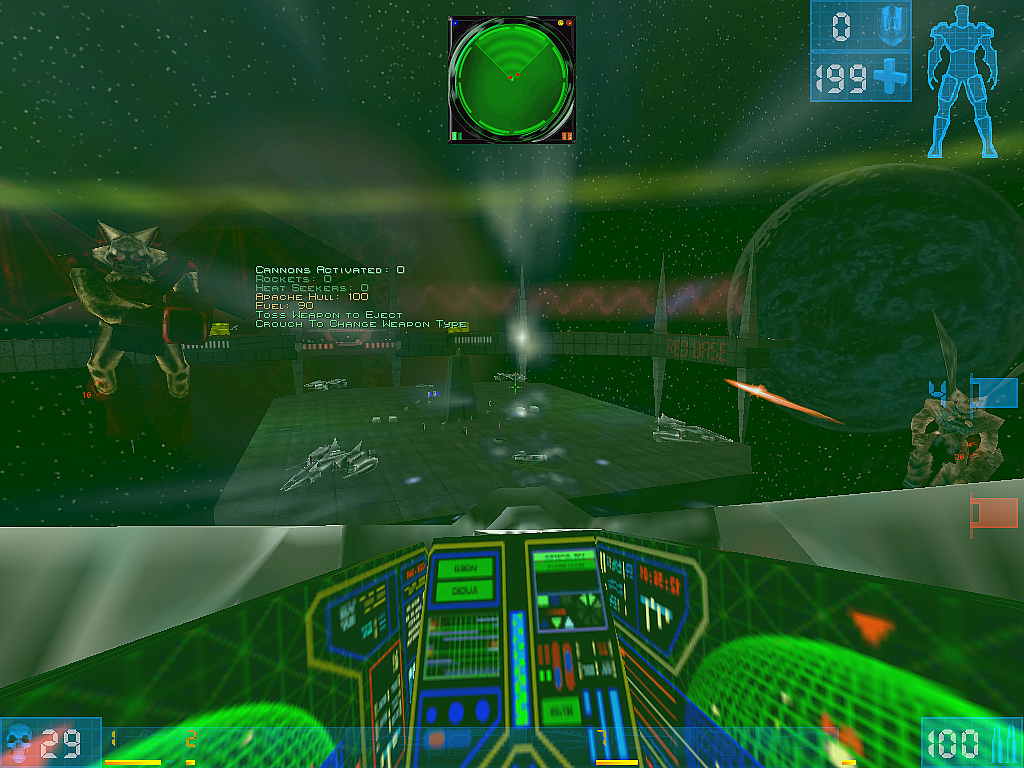 Unreal Apache: It has limited but powerful ammo, including cannons & missiles & heat seekers. It's only a little faster than a Warlord but it can fly backwards which is handy. I placed it in such a way that bots can't get access to it, they tend to "fly" them only on the ground which eventually results in an explosion that crashes the map; I've crashed it a few times and never crashed the map so bots + Apache = BAD!

Unlike all other vehicles on the map, you can't use the Apache to get the flag. It won't fit into the area where the flag is... though if you have the flag you can jump into it and fly away.

To fly the Apache involves getting on top of it and falling into the cockpit. Translocator can get you up there or you could use the Bat-Wings to fly above it and drop.

Green Screen Issue: Most of the original flying vehicles employed a visual effect of a green haze that fills the entire HUD to simulate being in a cockpit. It becomes problematic if you crash or eject as the green screen doesn't go away, though if you wait until you run out of fuel you're automatically ejected, there's no green screen, and if you've got Bat-Wings you can fly somewhere else from there.

Most of the Rocket-X type vehicles have this, I thought the one I chose didn't but it turns out it has something similar but in a less obvious color. SLV & Flying Saucer has it too, but the Apache doesn't and neither does the Quantum Fighter. Depending on how long a game you play it may not be that bad of an issue, but it intensifies the more you ride (as in get in it again and launch) the particular vehicles that cause it... in really long games you can get practically snow blind.

And as with many CTF maps I edit, there are UTDMW (Unreal Tournament Deathmatch Warlords) on this map; 6 total, 3 to a team. They can't fly as fast as most of the vehicles on this map but what they fire can outpace those vehicles and shoot them down... so don't get cocky.

Overall, this map suffers 1 not too surprising problem... conflicts. If you switch different vehicles a lot without dying you may find ejecting to be difficult. No conflict between the Rockey-X & Flying Saucer, as they're basically the same kinda thing... but I have found difficulty ejecting from the Quantum Fighter sometimes if I was previously in an Apache.

There are rare occasions of having Bat-Wings and they're not working if you've ejected from a vehicle but that doesn't happen too often.

Quantum Jets are only a little faster than Warlords, but they also have unlimited guided missiles. They are located exclusively on the platform in-between the bases.

Each base has a number of other weapons for those who don't want to fly, and players from either team can get to each base by other means than flying.

I'm downloading it now. Taking a while. I will give it a try.
Top

I tried it out but I got this error.

Hope the image comes out. This is new to me.

I think this link works;

Fixed the second image link. First link doesn't work even if I go directly to it.

That means you are missing a package. Look for SLV2Sounds it will have either a .umx or .u extension. You can probably find the package by downloading the SLV2 mutator (which will have all the packages for that mutator, some of which you are probably missing)
Like this site? Consider a donation to help with server costs.
Top

Okay thanks. I thought it would be included in the download. Haven't used that mutator before.
Top

A lot of mappers don't always include all the packages. Some think they do, but they often forget.
Like this site? Consider a donation to help with server costs.
Top

SLV2sounds didn't pop up in my mapping program as necessary... my bad.