SmartCTF is a mutator to promote teamplay in CTF games. It has a special scoring system, as well as an advanced scoreboard showing various teamplay orientated statistics. And many, many more features.

This mod was originally made by {PiN}Kev around January 2004, and linked to http://pin.progameplayer.com/SmartCTF but that site doesn't seem to work anymore.

Tweaked by {DnF2}SiNiSTeR in January - March 2005. Besides listing his changes, on this site you can also find an user / admin manual.
Version 4D was made by [es]Rush, Version 4D++ was made by Adminthis,changes are listed in the Changelog.

[es]Rush
January 2006
Support for IpToCountry actor!! If it is running SmartCTF will show little country flag miniatures below the faces.
Improved SmartCTF logo showing up.
Added additional stat - DefKills - will show up when bExtraStats is true. However it requires switching the stats every 3 seconds so it is not good when doing screenshots and want to have all the stats at one time.
SmartCTF 4C

{DnF2}SiNiSTeR
March 2005
Bugfixed version of 4B, not much changes.
Fixed: being unable to use a custom scoreboard like MODOS, SubStats or even the PURE Clickboard (after the first map).
Spawnkill time limits can be specified in the .ini-file.
Added a minimal flag capture bonus for the new scoring system.
Displays a faceless avatar instead of a blank space, when a player has no face.
No Flagsaves for flags really close to eachother.
SmartCTF 4B

{DnF2}SiNiSTeR
March 2005
Totally renewed and vamped the SmartCTF scoreboard!
The SmartCTF scoreboard now replaces the original scoreboard instead of painting over your HUD. But no worries, you can toggle between the normal scoreboard and SmartCTF scoreboard with the familiar command "mutate SmartCTF Stats". Also by default you won't see the SmartCTF scoreboard until the game has ended like with every other SmartCTF version. Therefore there should be no disadvantages, just the advantage that your HUD does not get screwed up anymore on occasion! (Like your Chat Area being hidden again...)
Furthermore the scoreboard looks much sexier. Read on...
For starters, players are accompanied by the face of their player model (avatar).
There is a dark shading behind the data for better readibility of compressed screenshots.
The statistic bars are now a ratio of the maximum, not the total.
Players have extra stats: Efficiency, number of HeadShots, ShieldBelt and Damage Amp pickups.
Therefore ping and packetloss is displayed under the avatar.
The team headers if some extra information as well. These are average ping and packetloss for that team, and percent of total SB/Amp pickups.
In the bottom of the screen the tickrate of the server will now display (at the end of the server line).
All this data is also dynamic, trying to get as much players to fit on the screen as possible. It supports upto 18 players at a resolution 1024x768.
Several bugfixes:
Now compatible with UTPure's WarmUp Mode!
Fixed "multiple player name" bug at end of game when people leave and join.
No more "Long Range" messages when killing with a zoomed sniper.
Show FC Location (bShowFCLocation in .ini) can actually be disabled now.
As well as bPlay30SecSound, but this is tricky. When enabled, it changes a setting on the client when the player joins. This change remains until that player quits UT. So he could also hear the sound when joining a non-SmartCTF server later

{DnF2}SiNiSTeR
November 2004
Fixes the "flagbug" where the flag is sent home when the FC disconnects. Now it is dropped there.
Lots of booleans you can set in the .ini file to hide certain SmartCTF messages on your server.
Same goes for setting SmartCTF bonuses and almost every other SmartCTF feature.
Can be setup as Server Actor so you don't have to select the mutator each time. Doesn't load for non-CTF gametypes.
Optional 'Assist' sound at assist, 'Capture' sound at capture and 'Nice Catch' sound at save.
SmartCTF messages have their own spot and don't interfere with other messages, this also fixes the Saved message bug.
Works with bots (thus offline) now as if they were players also.
Enhanced MultiKill Messages (Triple Kill & MegaKill + Announcer).
Code reformatting, various small code tweaks and optimalizations.
Rules for Cover Kills altered a bit (more flexable).
Missing Announcer sound on '30 second remaining' included.
Other small sounds added for some SmartCTF messages.
Long Range Kill detection and message at headshot location (headshot has preference).
Powered by SmartCTF message/logo.
Small Statboard enhancements.
Shows "Deaths" instead of "Seals" if no Seals.
SmartCTF V4.0

{PiN}Kev
January 2004
Option to turn off all smartCTF messages for those who fear distraction in matches.
-mutate SmartCTF messages off/on
Displays FC location right bottom side when your team has flag. No more need to F1.
Added flag return points as follows: Flag returns in own base = 0.5 pts. Flag returns in mid = 2pts. Flag returns in enemy base = 4 pts. Flag returns very close to capping = 8 pts with a big message.
Auto screenshot option for tourney mode maps. D/L the ini from main page and put in system dir.
Fixed assist bug where some times it didn't reward as it should.
Fixed accessed nones. No more scriptwarning: SmartCTF.broadcastlocalizedMessage stuff in the logs.
Fixed current time error for month.
Auto brings up stats at end of game.
No longer made stats override F1, so people who dont have the stats binded can turn it off easier with F1.
SmartCTF V3.0

{PiN}Kev
Team scores on top
Added ping , pl, and time for each player
Shows server name at bottom
Shows game ended message at top
So now with those you can take SS of SmartCTF stats instead of F1 after each map in matches/tourneys.
Now logs covers and seals into ngLogs (Prompted by dio\Apollo's ngLog parser: http://www.clan-dioscuri.com/serverstats.php) very nice stuff.
Added current time for those who lose track of time playing. The time is YOUR time, whatever your computer is set to.
Fixed some point system errors.
SmartCTF V2.0

{PiN}Kev
Fixed bug where not all players are drawn sometimes.
Sorted names by score
Changed color scheme for easier reading. The ammount of green in bar reflects the raw number of the stat.
Added flag icon next to FC
A cover kill is now either if the victim can see FC, ** OR ** if he's within 800 unreal units of FC (Approx 50 ft).
Auto turns off F1 when viewing stats
Made the number of pulse kills it takes to get pulse whore message configurable via ini. Just put the ini in the system folder.
Fixed some bugs like suicides not resetting the 30-kill spree, not resetting list of ppl who assisted or covered/sealed after flag return.
Fixed some accessed nones, which have no impact on server performance.
Please remove all earlier versions of SmartCTF. I forgot to label the 1st one SmartCTFV1 in the mutator list, but this one is labeled SmartCTFV2.

Download: SmartCTF_4E.zip
Other Versions: SmartCTF
Like this site? Consider a donation to help with server costs.
Top

There is one more with UT3 sounds and spree sounds if you wnat addit to ut-files http://unrealtournament.99.free.fr/utfi ... TF-UT3.zip 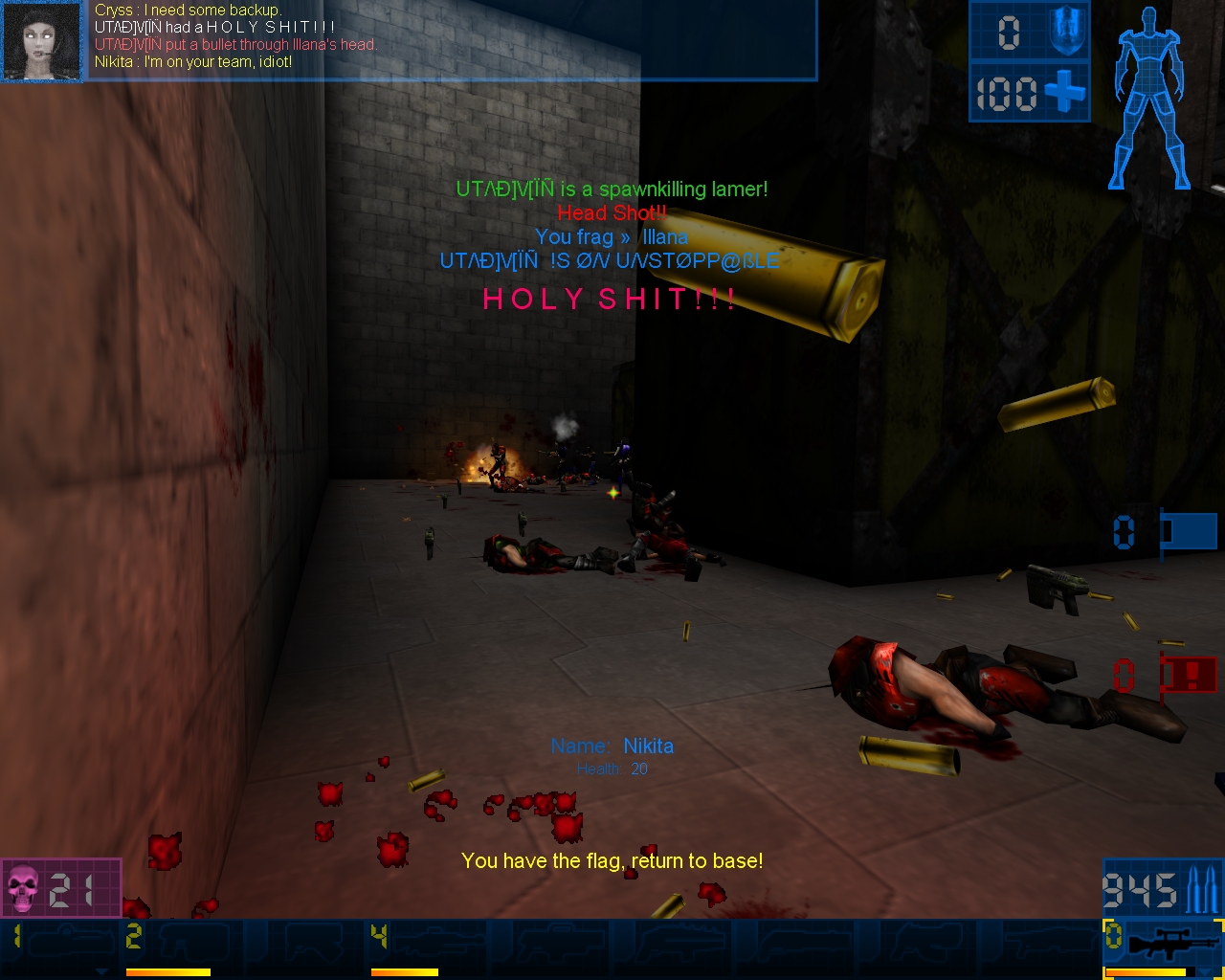